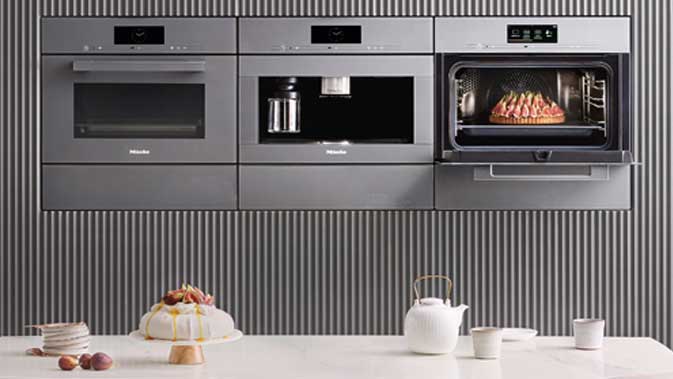 14 is now the proud number of design prizes which Miele has been awarded since the beginning of this year. After seven iF product design awards, the company was called up again seven times at the 'Red Dot Award: Product Design 2019'. Five awards refer to the new Generation 7000 built-in appliances alone, which are due for launch in May.

The jury ascribes high-quality design to Miele's ArtLine and VitroLine kitchen appliances. ArtLine consistently relies on handleless units and is the first choice for open-plan, puristic kitchens. VitroLine is defined by its glass fronts with solid metal handles with a smoothly finished glass insert in the colour of the machine. Both design lines are available in graphite grey, brilliant white and obsidian black, and have already received the Red Dot Award alongside the iF Product Design Award.

The new CVA 7845 is unique in many respects and worthy of awards for this reason alone. This coffee machine is a member of the new 7000 generation, has three beans containers, cleans its pipework and descales automatically, and adjusts the coffee spout automatically to the height of the cup, mug or glass. The CVA 7845 had previously already won over the iF jury and is therefore a double prize winner. The same applies to the new MasterCool series of refrigeration products which are due to be launched in Europe this autumn.

'Degree of innovation, durability, functionality and environmental compatibility' are criteria according to which the Red Dot jury selects its awardees. Miele dishwashers from the 7000 series meet all these expectations. Consequently the Red Dot Product Design Award 2019 was presented to fully integrated and integrated dishwashers with AutoDos and PowerDisk. And once again, Miele appliances are multi-awarded as the G 7915 SCi holds also the iF Award and the G 7965 SCVi even has received the iF Gold Award.

Last but not least, applause and a Red Dot for Miele's Little Giants: Behind the name are washing machines and tumble dryers designed for commercial use. The new PWM 9 and PDR 9 Performance Plus models require only a small installation footprint and, for good measure, are also considerably more economical than their predecessors.

Company profile: Miele is the world's leading manufacturer of premium domestic appliances including cooking, baking and steam-cooking appliances, refrigeration products, coffee makers, dishwashers and laundry and floor care products. This line-up is augmented by dishwashers, washer-extractors and tumble dryers for commercial use as well as washer-disinfectors and sterilisers for use in medical and laboratory applications (Professional Business Unit). The Miele company, founded in 1899, has eight production plants in Germany as well as one plant each in Austria, the Czech Republic, China and Romania. These are joined by the two plants belonging to Miele's Italian medical technology subsidiary Steelco. 2017/18 turnover amounted to approx. EUR 4.1 bn, with sales outside Germany accounting for 70%. Miele is represented with its own sales subsidiaries and via importers in almost 100 countries. Throughout the world, the family-run enterprise, now in its fourth generation, employs a workforce of around 20,100, whereof 11,200 are employed in Germany. The company headquarters are located in Gütersloh/Westphalia, Germany.